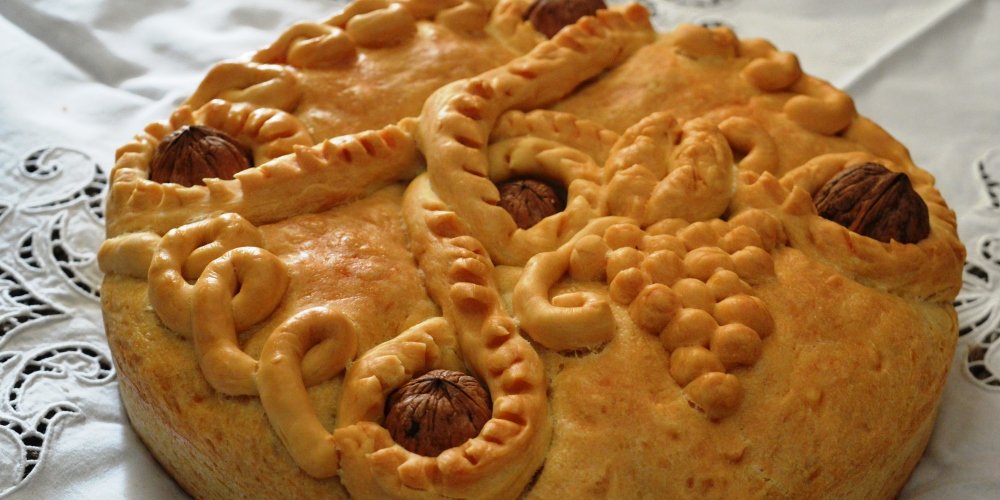 SEVERAL CUSTOMS REVIVE ACROSS THE COUNTRYSIDE DURING CHRISTMAS AND NEW YEAR’S EVE.

In the past, white animals (sheep and cows) should enter houses in order to keep evil spirits away. Similarly, sea squills are hanged on the doors as a symbol of immortality. One of the most remarkable modern Christmas traditions is the Divine Liturgy inside a real manger in the cave of Marathokefala.

Ancient customs for curing patients are still alive. In Sfakia patients devote dough dolls to Saint Anthony to cure their illnesses and in Psiloritis they devote human shaped breads, lazaropsoma, during memorial services. During the festival of Agia Pelagia, patients bury their aching legs or hands in the sand of the beach. In Achlade clothes are put on the sacred turpentine tree of Saint Fanourios. During the celebration of the Holy Cross at the top of Kofinas revives a dendrolatric custom; the fruits of three trees, which locals call apples of Kofinas are gathered, blessed by the priest and shared to the pilgrims that eat them.

Carnival is another great celebration with roots deep into the past and is enthusiastically celebrated in places like Gergeri in Heraklion, with Arkoudiarides (wild bears) wearing furs and bells, the soiled faces of the Lerades, Siviani which is a special mask made of the roots of American aloe vera plant (known in Greek as the immortal plant) and other typical figures such as the Camel and the Cadi (Turkish judge). Larger cities on the island organize parades and treasure hunts.

Apart from the common Easter customs in Greece, Crete has its own local traditions to show. These include the auction of the Cross, sheep blessing under the epitaph, the burning of Judas, the transferring of the Holy Light at home while remaining speechless and leaving red eggs on graves. Also during the celebration of Saint John the Theologian at Marmaketo, on Lassithi plateau, the dried orchids of the epitaph bloom again. In Agios Thomas and on the Asterousia range ancient habits revive; temples and houses are surrounded with waxed ropes, to keep evil spirits away.

There are more customs, such as Klidonas, celebrated on the day of Saint John the Baptist in late June. During the feast of the Transfiguration of Christ, pilgrims devote the first grapes of the season to bless their vineyards, while on the same day at the top of the peak Afendis of the range Dikti, participants try to find coins in the soil around the church. On November 3rd, on the feast day of Saint George Methystis (“methystis” is the one that makes you drunk) barrels with wine are first opened. The villages Asi Gonia and Karoti in Rethymnon host the celebration of Saint George. Sheep are milked before the priest and milk is shared to the congregation.

You can find out more about which cookies we are using or switch them off in settings.

This website uses cookies so that we can provide you with the best user experience possible. Cookie information is stored in your browser and performs functions such as recognising you when you return to our website and helping our team to understand which sections of the website you find most interesting and useful.

Strictly Necessary Cookie should be enabled at all times so that we can save your preferences for cookie settings.

If you disable this cookie, we will not be able to save your preferences. This means that every time you visit this website you will need to enable or disable cookies again.

This website uses Google Analytics to collect anonymous information such as the number of visitors to the site, and the most popular pages.

Please enable Strictly Necessary Cookies first so that we can save your preferences!